TL;DR: Diesel is bad. I’m proposing a campaign called Zero Diesel with two differentiators: 1) a focus on network effects: attempting to increase the network benefits of electric vehicles and decrease the network benefits of diesel, region by region, and 2) organizing parents of asthmatic children (with a focus on poor people of color) to use people power to force companies and government agencies to pay the costs of electrification. When necessary, we’ll engage in antagonistic action (e.g. boycotts and direct action such as blockades and interference with business as usual). 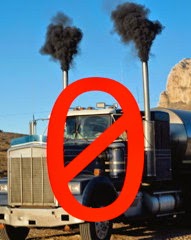 Why: Diesel is a Climate and EJ (Environmental Justice) Villain

After four decades of the Clean Air Act and the EPA, we still have 200,000 premature deaths a year in the US due to air pollution (7 million worldwide), as well as a staggering load of asthma and other health issues. One of the biggest culprits is diesel combustion, which is an outsize contributor to smog formation as well as the production of PM2.5 — fine particulate matter below 2.5 microns in size. This is absolutely tiny — by comparison, an average human hair is 70 microns in diameter. High levels of PM2.5 are linked to hospital admissions and death as well as the aggravation of asthma and other respiratory problems.

This pollution is not evenly distributed, of course. The residents of areas heavily impacted by air pollution tend to have more melanin and less money. So we end up with a situation where poor children of color are disproportionately afflicted with asthma, leading to obesity, emergency room visits, and missed school days — a cascading series of impairments on an already vulnerable population.

In addition, diesel is particularly bad for climate pollution. While it is better than gasoline in terms of CO2, it produces a lot of black carbon — one of the worst short-term contributors to global warming.

In order to drastically reduce our emissions of the heat-trapping gases that cause climate change (“greenhouse gases”), we have to do two things: 1) electrify everything and 2) switch to clean sources of electricity. I think that #2 is actually easier than #1 — it’s easier to change a few tens of thousands of power plants than hundreds of millions of cars — and in fact #2 is well under way, due in part to financial considerations and in part to a massive grassroots movement against fossil fuels. That’s not to say that we don’t need to continue to organize and force the transition to clean energy; the market is headed in the right direction, but it won’t be fast enough on its own. But #1 is the weaker point right now.

In particular, the installed plant of over one billion automobiles worldwide poses a formidable obstacle to weaning ourselves from fossil fuels for transportation. A push for mass transit will help, but personal automobiles as well as trucks and commercial vehicles of many kinds are likely to continue to be needed for decades at least. While electric and hybrid vehicles are finally doing well in the market, they are still a small percentage of vehicles sold and a minuscule fraction of actively used vehicles. Part of the issue is that there are strong network effects: the charging network for electric vehicles (EVs) is still in its infancy while the refueling network for liquid fossil fuels is pervasive and standardized. At this juncture we need extra-market forces to accelerate the adoption of electric vehicles.