I hear you will be a panelist at a forum tomorrow on the future of Occupy. I find that remarkable – almost as if Karl Rove were invited to a friendly discussion on the future of the Democratic Party. You claim to “share the concerns of the Occupy Movement” but so far you’ve been responsible for some of the harshest repression seen in the US, including the use of tear gas, not-always-lethal projectiles, and flash-bang grenades in the streets of Oakland. To prevent another encampment, you’ve flooded Oscar Grant Plaza, threatening the iconic oak tree, a symbolic reminder of how the 1% so often destroy nature in pursuit of power and profit. In addition, you’ve done all that you could to minimize Occupy Oakland’s effectiveness, discouraging people from joining the West Coast Port Shutdown and calling it “economic violence”. I have yet to hear you use the label “economic violence” to describe evictions, foreclosures, massive fraud by the banks, or the day-to-day suffering of unemployment, job insecurity, and lack of worker control under capitalism. 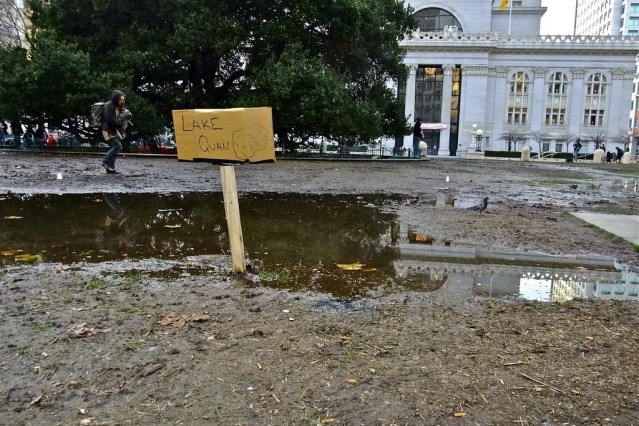 The real way you could have minimized the length of the port shutdown in Oakland was to publicly ask for the authorities and police in other cities not to use violence and repression against the day’s actions – because that was precisely the condition under which Occupy said the shutdown would be extended, and precisely the reason why I, on very little sleep, went back to the ports for the third time in 24 hours in order to picket the 3am shift.

I have heard that you used to be a Maoist. I’d love for you to confirm or deny this. If true, perhaps you could explain why you became a “progressive” instead. “Progressive” politics involve protecting capitalism while trying to lessen the pain it inflicts on the 99%. You’ve succeeded in gaining state power, at a time when state power is being increasingly questioned, to implement an agenda that looks increasingly ridiculous. The last 40 years have seen capitalism grow only harsher and extend its control ever further. Even if you could succeed in bringing us a capitalism that is “kinder and gentler” on its human victims, what will happen to the planet when capitalism’s insatiable need for growth outstrips the ecological limits we are already transgressing?

(If, dear non-Quan reader, you doubt that Quan is protecting capitalism, please read her “Open Letter to Occupy Protestors” about the shutdown. Her message boils down to “please don’t scare capital away from the port”. Never mind that we protest because we are sick of a system that demands that we cater to capital’s every whim, on pain of disinvestment.)

I don’t support the recall action against you, because I’d rather you, and the other temporary dictators we call mayors, governors, and presidents, be replaced by a revolutionary alternative that provides true equality, abundance instead of austerity, and a path to environmental sanity. It may sound crazy to some, but it’s a lot less crazy than it sounded three months ago. Perhaps your younger, wiser, more naïve self understands.

I understand one reason for your appearance on the panel tomorrow. Your future and Occupy’s future are intertwined. Let me take you at your word for a minute, that you actually want to be constructive at this moment in history. Instead of repressing the movement – or possibly worse, trying to help in a bumbling way – try this:

Get out of the way.

We have the right to challenge and change the most fundamental aspects of our society. Stop using the violence of the state against us.

Everybody wants demands. Instead, I’ve got some suggestions. Here’s some ideas for starters:

Oh, and while you’re at it, turn off the sprinklers in Oscar Grant Plaza.

2 thoughts on “An Open Letter to Oakland Mayor Jean Quan”