On Tuesday night, December 6th, the SFPD raided and destroyed the Occupy SF encampment. As a side note, related to the main story, there were 3 or so firefighters there – there was some piece of SFFD equipment holding up lights to further illuminate the already well-lit plaza. I talked briefly with a couple of the firefighters, and told them that their participation was shameful. One of them replied sarcastically, “Oh, I feel bad now”. My opinion of SFFD dropped significantly. But events the next night would raise my opinion again.

On Wednesday evening, December 7th, people came back to Bradley Manning Plaza/Justin Herman Plaza to have a GA (General Assembly meeting). I came by a little bit late, and arrived to see 7 columns of 10 riot cops each positioned in the walkway (and more cops elsewhere) while people were gathered in the plaza. I came to be focused on a small aspect of that evening’s events, which I think is rather telling of our current situation. I tweeted from time to time, and include some of those tweets here to illustrate the events and mark them precisely in time.

The cops marched into the plaza and circled a small portion of it – about a third or a quarter. It seems that there was a little bit of time for people to decide whether to stay or not. One of my friends decided to stay in the plaza, willing to risk arrest for the sake of upholding our basic First Amendment rights to assembly and free speech. About 40 or so people and one tent were within police lines for over 2 hours during the ensuing standoff. It should be noted that lots of other people, including myself from time to time, were in the plaza, but outside of police lines – the police did not have enough numbers to surround the entire plaza.

At the edges there was quite a bit of verbal confrontation. Apparently Chris Jones was sitting on the raised embankment – for the most part cops were on or in front of that embankment. However, where he was, as Chris Jones points out in this video of the police attack, the police were standing inside the embankment. Nevertheless they had a problem with his position. He had a sign that said “Bill 1867 = George Orwell’s 1984”. Bill 1867 is also called the National Defense Authorization Act (NDAA), which, in the words of the ACLU, “would authorize the president to send the military literally anywhere in the world to imprison civilians without charge or trial…. No corner of the world, not even your own home, would be off-limits to the military.” That’s rather important to be protesting, and it adds a certain tang to the following events.

I was right in front of the police lines, keeping as close a distance to the cops as I could, and doing my part as one of the white people regularly yelling at police officers. To the right of me was a sudden scuffle, and two people were pulled over the embankment, dragged through the grass, and each jumped on by several cops. It looked pretty damn rough given the number of cops, the distance from the crowd, and the lack of urgency. I have to admit that I didn’t pay a lot of attention right away, but many of the people nearby were yelling about one of the arrestees. He was still lying prone on the ground a couple minutes after being zip-tied, even though the other arrestee seemed in reasonably good shape and had shifted to sitting up.

People started yelling for medical attention, for a medic, for 911. The cops stood around impervious. Eg:

People were very concerned for the young man. Some said he had been choked by the police. As you can see in that YouTube video (around 2:20 in), one cop is bearing his knee down on Chris Jones’s head or perhaps even his neck. I could see that he was lying down, and did not seem to be moving except that he was shaking or convulsing, perhaps having an epileptic fit or having difficulty breathing, several minutes after the police attacked him. If he was faking it or hamming it up as some soccer players sometimes do after a tackle, well, he was an incredible actor – because as you will see, he was still lying down, clearly in a bad state, almost an hour later.

People were yelling about 911, so I decided to walk across the street and place the call. It had already probably been a few minutes since the arrest. I had personally seen that he was lying on his side, shaking, and didn’t seem to be in good shape. A couple of cops stood around by him without paying any attention to him. When I placed the call to 911, I asked for an ambulance. I said (based upon what people in the crowd had said), “There’s a man here at Justin Herman Plaza who is shaking or having convulsions. Somebody choked him – he needs medical attention.” The dispatcher asked me who did it. I wasn’t about to say “a cop”. Some person or persons were responsible, no doubt, but I was honest in replying, “I don’t know. I’m not concerned about that right now. The important thing is to get this man medical attention.”

At some point a nurse from the people detained inside the police line tried to help him and placed something under his head and a blanket over his body: 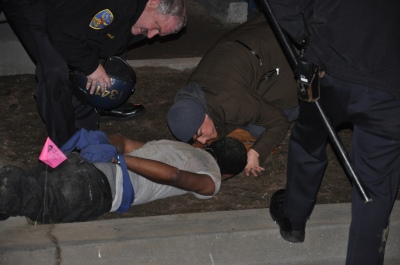 #OccupySF Ten minutes ago I called 911 for an arrestee choked and in convulsions. No ambulance yet.
7:02 PM, Dec 7th

#OccupySF Still no sign of an ambulance or medical attn. I guess the cops are medical experts now. Thankfully he appears to have stopped shaking.
7:12 PM, Dec 7th

Despite all that was going on during this confrontation, I kept looking out for an ambulance. I figured one could be there relatively quickly. As the time wore on I became more and more sure that the 911 dispatcher had just ignored my call.

Just as I lost all hope, an ambulance from a private company (King) arrived. With some backing up and beeping, it did a several-point turn, and then drove off! I couldn’t fucking believe it.

#OccupySF Ambulance was private – King. Talked to SFFD ambulance driver and chief. Looks like chief is talking to a cop in a van.
7:19 PM, Dec 7th

I jogged up Market Street hoping to catch the ambulance. No chance – it was long gone. But I saw an SFFD ambulance a couple blocks up the street. I went up to the driver and told him about the situation. He seemed sympathetic but said they couldn’t go in until the cops said the situation was no longer “hot” or “hostile”. Note here that the police get to decide what is hostile – while the crowd may have been hostile to the police, we certainly weren’t to paramedics. I believe the ambulance was there in case a police officer was hurt – but obviously wasn’t going to be used in case a member of the public was hurt.

The driver told me to talk to the fire chief, who was nearby. Shortly after I did, the chief walked across the street to talk to a cop in a van. The chief came back and got back into the SFFD car without talking to me. I assumed from that the cop had nixed any idea of the paramedics going in. I walked across the street to talk to that cop myself. I explained the situation, and he said, calmly and rather dickishly, “Oh, there are plenty of people there to look out for him”. He said the ambulance couldn’t go in because the situation was “unsafe”. I said, “Look, nobody’s going to mess with them”. He said, “Tell that to the folks in LA”.

I think this is a critical little point to look at. I assume he is referring to the story that an ambulance was shot at in Los Angeles while responding during the Rodney King riots. Because of that one incident in a far more intense situation, police now think they have license to arbitrarily deny medical attention during a confrontation. This attitude of extreme certainty, security, and fear above all else is insidious and revolting.

I returned to the scene of the protest, disgusted and hopeless. I couldn’t believe this bullshit where the cops are the sole arbiters of everything during any such “hostile” scene.

#OccupySF Apparently firemen are trying to get through to the injured man. Denied by cops, now allowed after chants of “let them through”!
7:30 PM, Dec 7th

Something must have happened. Perhaps the fire chief reconsidered. I have no idea. All I know is that I saw a commotion. People told me three firemen walked up to the police line to try to see the injured man and were rebuffed. They fell back a bit, but the crowd started chanting, “Let them through!”. Apparently, the firemen consulted for a bit, and then turned around and walked right through the police lines to attend to Chris Jones. I think that was a very telling moment – the firemen chose to defy the police, knowing that they had a certain moral authority. What were the police to do? Arrest them? Block them?

In this picture you can see two firemen attending to the injured man while a third contacts the ambulance: 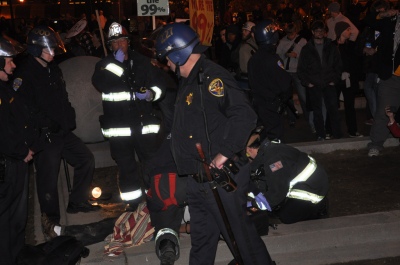 #OccupySF Ambulance [has] driven with lights flashing onto walkway. Getting out stretcher. Looks like same guys i talked to – good for them!
7:32 PM, Dec 7th

Here you can see the firefighters placing Chris Jones in a stretcher and preparing to carry him off to the ambulance. I am very thankful to the firefighters for going beyond their mandate, beyond the letter of their job, to fulfill the spirit of their calling: to help people in need.

#OccupySF The injured man has been carried off to the ambulance 50 minutes after i called, and no doubt someone called before i did.
7:40 PM, Dec 7th

As one little extra insult, the SFPD put a cop in the ambulance. I mean, what is the injured man going to do? Run away? After being unable to sit up for an hour?

Despite that, this simple thing – this treatment that ought to be automatic in a case like this – seemed like a major victory against the mean-spirited, vindictive forces of the police.

On the one hand, it’s a travesty that the police department and the individual police officers of San Francisco would act so callously. On the other hand, it is inspiring that the firefighters would act so righteously, and defy the police in order to give this man the medical attention he needed.

It was a small victory to meet a basic human need (in this case, medical care) over the imperatives of “security” and the wishes of the repressive forces of the state. But it is a victory I feel very proud of being a small part of.

What Happened in the End?

The police let those who wished to leave from the center do so. Those who wished to stay would be arrested – but then the police all left anyway. Why, no one knew. People moved back into the plaza to continue the GA “that was so rudely interrupted”.

I have been unable to find any information on how Chris Jones is doing. I hope that he is alright, and does not suffer any long-term medical consequences. Please add something in the comments if you know what happened to him.

Someone else has written up a post: OccupySF: Chris Jones Assaulted By SFPD. Most of the images above were taken from the OccupySF & SFPD evening GA night after raid Flickr set.